Rules to Adhere to – Air Rifle

Shooting is a technical sport that relies on equipment for performance. We have rifles, additions to rifles (buttplates, front sights etc), clothes, ranges and supporting equipment like electronic trainers and shooting stands. Equipment changes and become better, requiring rules to be re-worked and amendments added to stay up-to-date. This means that over time, the number of rules have added up and are now extensive. Not all rules are directed directly to the shooter; many are for range officers, the construction of ranges and equipment controls. It’s still good to know them, but these are things that should work without any interference from the shooter. It’s not your job to make sure the light condition at the range is correct or that the correct measuring device is used in the equipment control.

As a newcomer to the sport, it can be tricky to know what you can and can’t do. The rules are many and all have to be adhered to. At a lower level (below state/country and international) some are not being tested regularly for. These include mainly clothing rules which are hard to test for and requires more elaborate equipment. Even though this is the fact, it’s still important that they are adhered to, at least for the time you do participate in a competition with testing.

There will be four posts, starting with the rifle rules. Then comes shooting position, clothes and competitions.

Rifles have gone from standard looking to more of a blueprint of a rifle over the last 15 years which have made them much more individualized than before. They can be setup in almost any way you like without an easy way to determine wheter you’re within the regulations or not. Knowing what the regulations are and how to measure them, is very important. So here you’ll find applicable rules for air rifles. See the Official Statuties, Rules and Regulations document for reference.

Lets start from the butt of the rifle and work our way forward.

All specifications are taken from the Center line of Barrel.

An important one, and one you can check easily, is the total weight allowed, 5.5 kg. That is with all parts attached (buttplate, sights, cheek piece etc) that you normally use during shooting. The total length of the system is set to maximum 850 mm measured from the back of the system to the muzzle (7.4.4). This is usually self-regulated by the manufacturers in the sense that you can’t extend it further without replacing the stock extension tube with an after market one.

Caliber is set to 0.177 or 4.5 mm and you can only use air pressure or (carbon dioxide – CO²) to expel the pellet with (7.4.6). The pellet itself can be a few tenths of a millimeter smaller or larger than this, but it won’t give you any extra points. Scores are measured using a gauge set to 4.5 mm and that size also used in electronic scoring systems.

An electronic trigger can be used if it complies with all other rules. It has to be within total weight limit, attached to the rifle at all times and not be programmed or otherwise set to go off automatically (7.4.1.6). It’s also good to know that if you run out of battery during a competition, no extra time or shots will be allowed to fix the problem. It’s considered a fault by the competitor – not by the organizer – so make sure it works before leaving home. No restrictions on trigger resistance exist.

Athletes must use only equipment and apparel that complies with ISSF Rules. Any gun, device, equipment, accessory or other items that may give an athlete an unfair advantage over others and that is not specifically mentioned in these Rules, or that is contrary to the spirit of these Rules, is prohibited.

So anything that might be fine under the current set of rules, but pushes the limit or cover an area that hasn’t been up to discussion before, could still be prohibited under this rule. This is to some point a subjective rule and is up to the equipment control officer to enforce. 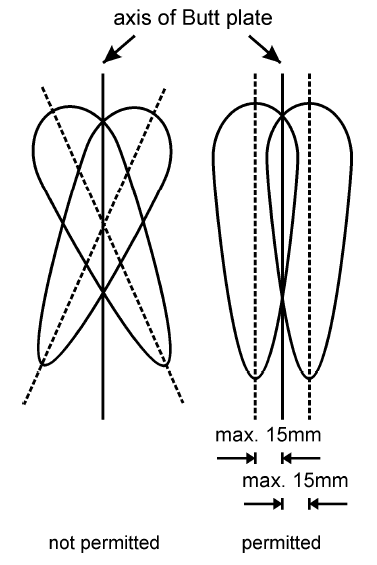 Buttplate seen from behind. Picture from issf-sports.org, rules document pg. 317

Maximum depth of the buttplate is set to 20 mm, measured from a line between upper and lower part of the plate to the maximum depth achievable. This is usually all the way in to the metal, so the attached rubber for increased friction is not considered if there’s space in between them (like in MEC’s contact buttplates). The lowest part the buttplate can be no further away than 220 mm, measured from the center of barrel (I’ll be using this expression more often, so the abbreviation CoB is in place). Also, the heel to toe length of the buttplate is set to maximum 153 mm.

Any weights protruding forward from the buttplate is prohibited. They neither fit under the rifle dimensions nor the “The rifle must not touch the jacket or chest beyond the area of the right shoulder” rule (general interpretations and 7.6.1.2)

Those rules are simple to understand, the trickier one is the setup. The buttplate can not be turned around a horizontal axis (upper part to one side and lower part to another). It can be offset a maximum of 15 mm to one side (the whole plate at once) OR turned around a vertical axis (pointing either towards the body or away from it). Both these setups are to move the rifle in a horizontal plane without changing the shoulder contact. Just make sure to only use one direction or else you’ll have to change it at the equipment control. The buttplate is allowed to turn around a z-axle as long as the 220 mm rule is adhered to (the plate points downwards instead of straight back).

The cheek piece can’t be anatomically formed (7.4.2.3) or extend further out to the side than 40 mm from CoB (H). If it does extend further than that, just cut it down on one side and it will be back within regulations.

Maximum distance for the pistol grip and cheek piece.

There are a few important rules for the pistol grip to adhere to. Since this is a standard part of the rifle to modify it’s crucial to know what the rules are. For distances, there are only two to stay within; 160 mm (C) from CoB to the bottom of the grip and 60 mm (G) out to the side from CoB in a horizontal plane. The second one is new for 2013 and the first one is rarely a problem. As for the cheek piece, the grip can’t be anatomically formed. This means no ledge at the bottom to rest the hand on or any grooves between fingers for increased grip. It can be altered but has to have a flat surface and follow a similar profile as the original pistol grip. It can’t have a thumb hole either which isn’t a problem today when barely any rifle stocks or grips are made this way. Another important aspect is grip. No material can be added to increase grip. Since almost all production pistol grips are delivered lacquered, this can be seen as the upper grip limit.

No scope, magnifying glass or corrective lens attached to either the rifle or rear sight are allowed (a corrective lens can only be attached to eyeglass frames). Polarizing filters, coloured filters or a variable iris aperture are allowed as long as they don’t have any of the properties mentioned above. Any device using mirrors to aim with the opposite eye (left eye for a right-handed shooter) is allowed provided no lens is used. The diopter can be moved sideways, just make sure the 40 mm offset rule for the cheek piece is adhered to while doing this.

A blinder may be attached to the rear sight (or the shooters head). It can be maximum 30 mm wide and 100 mm long and only be used for the non-aiming eye.

Maximum height of the sights are measured from the center of front sight ring to CoB and has to be within 60 mm (A). This includes any sight raisers from the factory and those added afterwards. Front sight tunnel can maximum be 50 mm long, 25 mm in outer diameter and not protrude further than the muzzle.

View from below, pistol grip and width of front stock.

The maximum depth of the front stock is set to 90 mm (B) and the width to 60 mm (F). If the maximum allowed distances isn’t reached, the stock can be brought up to this level. However, as for the pistol grip, it can’t be anatomically shaped or increased the grip upon.

In case the upper maximum weight limit hasn’t been reached, adding weight to teh rifle is allowed with some restrictions. Barrel weights have to be within a radius of 30 mm from CoB. No restrictions on how they look exists (can hang under or on the side etc) as long as they are within the 30 mm diameter. Weights attached anywhere else on the rifle have to follow the contour of the rifle and be within the outer dimensions. That is, not outside of 40 mm distance for the cheek piece, 30 mm at the front stock, 60 mm at the pistol grip and 220 mm at the buttplate. But the only distance of importance is the 40 mm, the rest falls outside of the contour of the rifle and are thus prohibited. Keep them close to the stock to not end up at the equipment control and have to move them.

What people normally have problems with when it comes to equipment controls are things that can be fixed relatively easy. Weights protruding too much to one side, a buttplate set too low or at a slight angle, the total rifle weight or the front sight protruding the muzzle. All these things are unnecessary to have but can easily be fixed by moving things slightly. Bigger problem areas may include moving parts that needs training to get acquainted with, like the pistol grip or cheek piece. Bigger faults in the buttplate is of the same magnitude. Make sure everything is fine at training so you stay out of trouble at competitions.

Filed under Rules and Regulations